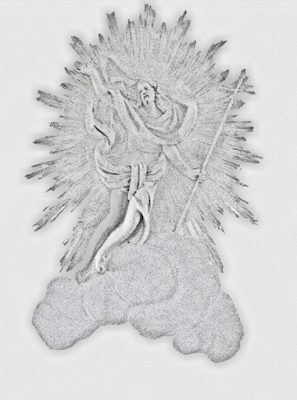 
The story about the ascension of Jesus uses physical metaphors to state a divine truth. Just as the resurrection narratives employ bodily symbols to speak about the Christ they experienced following the crucifixion, the ascension is another expression of resurrection written as a mythical construct wherein Jesus is seen with a human body, and still bearing the wounds of his death, rising up into the sky to take his place in heaven. The point is that the significance of the Christ event cannot be contained in this world, but has transcending meaning that reaches every space and time, even beyond spatial and temporal reality. The early followers of Jesus most certainly had a profound experience of the Christ following his death. So they talk and write about it in the only way that makes sense to them and their context.

For me the interesting snippet from this story is the one about the followers of Jesus gazing up into the sky with an angelic response of "you Galileans—why are you standing here looking up at the skies? Jesus, who has been taken from you—this same Jesus will return, in the same way you watched him go into heaven.”


In a narrative that incorporates the corporeal like this pericope has of course the immediate response to an ascending view of Jesus would be looking up into the sky in which he has disappeared. Hence, the result is the inquiry of the "messengers" (i.e. angels).

The Galileans look up to the heavens which follows the them, but the theme is continued with that question. The mystery of the Christ will reach beyond this locale, will reach beyond this moment. Thus, why focus on the sky when the sky is not a box into which the mystery can be packaged all neat and complete and thereby contained to be manipulated by their own wits and wills (and our desires, as well).

It is a distraction—this peering up into the sky—something to fill the time and space with anything but what needs to be done. Matthew, the Evangelist, in his Gospel completes the story of Christ and the disciples with a command:


“All authority has been given me
both in heaven and on earth;
19 go, therefore, and make disciples of all the nations.
Baptize them in the name
of Abba God, and of the Only Begotten,
and of the Holy Spirit.
20 Teach them to carry out
everything I have commanded you.
And know that I am with you always,
even until the end of the world!”
(Matthew 28—Priests for Equality. The Inclusive Bible. Sheed & Ward.)

With such a weighty command to be fulfilled, no wonder they preferred a distraction. It is no small task to make followers of Christ, especially considering that following Jesus may very well lead to the same end—death. Not only that, but to share a message with others that they themselves had less then a handle on. It was truly a mysterium tremendum et fascinans, while fascinating, creating great fear even to the point of trembling. Looking into the sky notes their fascination, but also their reluctance. Instead of focusing on what needs to be done, they—like we—prefer to be distracted.


I was serve a small, rural congregation in North Carolina. The church has dwindled to 10 or so members, but they were located in a place where population was expanding. Also, there we only 2 churches in a 15 mile radius, both church sitting a block apart from each other. The question was asked: why are we not reaching out to the un-churched and being the church for them? The answer was simple, but not easily articulated. No one wanted to speak the truth.


The fact of the matter was that while the white population had declined over time, it was the black population that was growing. And, that was seen to be a problem. "But they are black," was their answer. It was not the relevant answer, it was the answer they had grown accustomed to and felt more comfortable with. The relevant answer would have been, "we are racist, and do not want to share what we have with persons of color."

It was a congregation that knew only a handful of hymns. So it would not be uncommon for us to sing the same song every week or for weeks at a time. Their favorite one was I'll Fly Away. It became quite apparent that their indulgence with that song was the expression on their theology and state of distraction. They thought of themselves as in a no win situation, that there church would die within the decade, and the only viable solution was to "fly away" with Jesus:

The problem with the church in our time and place is that it is racist. The churches that seem to be growing in number are white evangelical (i.e. fundamentalist) congregations that embrace white nationalism and understand the Christian Faith to be centered in purity. Perhaps needless to note, their commitment to purity is also a commitment to racism.


Likewise, to a large extent their purity also incorporates as need to keep women in a second-class citizen context. No women are to have authority over men.

Instead of claiming their racism and misogynistic ways, they focus on a prosperity gospel that equates faithfulness to Christ with material well being. As long as people can be distracted with the thought of having more money, and thus, having more power, the reality of the church's depravity gets ignored and even denied.

Why do we prefer distraction over actually following Jesus? It is the path of least resistance. It is the keeping of status quo. It is the way that we must turn from to follow Christ in the way of just peace.