HAS IT REALLY COME TO THIS?

OK. It has happened. I am at wit's end. I am beyond overwhelmed. Feeling just vulnerable and stressed seems like eons ago.

Here's the thing: Some people I care deeply about are so far beyond reach with reason, logic, wisdom, commonsense, empirical data, and any sense of being other than totally convinced about things that are just wrong--but to them true, factual, reality.

It seems to begin with their understanding God and then rapidly descends into some bane, racist, misogynistic, gnostic, materialistic, greediest and malign intentions. Their ideology contains some basic theories that are simply false. These include things such as:

(1). Trump is our president because it is God's will and Trump is leading our country in keeping with God's will.


(3). The Bible is inerrant and dictated by God through human mediums that recorded it perfectly (that being the King James Version) and is a consistent teaching without any errors or contradictions or need for analogy.

(4). True religion is political in the sense that being Republican and agreeing with the current administration is the only way to be right (as in correct, pun intended).

(5). At the heart of the Bible is the teaching of a penal substitution atonement wherein God's anger needs to be supplied for in the sacrifice that Jesus made on the cross. This theology is the only possible truth. Jesus died to forgive our sins which was made possible by appeasing a God whose holiness is primary.

(6). Thus, holiness is the most important tenet of the Christian Faith and is to be understood as personal and in an individualistic way. Jesus is "my" personal Lord and Savior and my salvation is with the litmus test of holy living.

(7). Holiness in living is basically two things, and two things alone: being anti-abortion and being anti-LGBTQX. The first is referred to as being pro-life. The second is the ultimate abomination against God.

(8). The reward for holy living is prosperity in a material, capitalistic, consumeristic, and wealth-oriented way. If you are poor, it is your own fault. If you are middle class you are supplicators of our life style. If you are part of the 2% you have no responsibility to those who are in poverty or just getting by. Thus, all legislation that supports care for others than the 2% is not to be supported and the goal of legislation is to provide ways for the wealthy to become more wealthy.

(9). Since the wealthy could not have sustained or grown their wealth without slavery, slavery is OK and there is no biblical or moral teaching that indicates otherwise.

(10). Therefore, people of color do not matter except for their ability to provide necessary labor and to do so without fair or equitable wages and benefits.

These 10 beliefs are mostly owned and operated in covert ways that are hidden behind layers or popular talking points. Other times they can be seen overtly in the words and actions of people.

One cannot be "pro-life" and not care about one's welfare and well-being after birth. If one is truly "pro-life" universal healthcare makes total sense, the death penalty is in error, warfare and violence are taken way to lightly, and people of color and of other ethnicities are inherit of all the value and diginity of each human person.

One cannot live in holiness while debunking the claims of science and undermining the world of academia, especially when it comes to the liberals arts and in forms that are claimed to teach falsehoods due to political leanings. The educated who are the experts in fields of study and have a wide base of support from those who are known to have an understanding of the subject nature are to be supported and their ideas considered to be a blessing to the end that all humankind will benefit from what they have to offer us and the global community.

One cannot live in holiness and live in an individualistic way. Individualism is a product of our culture, is nothing new, and has always been a detriment to life and the integrity of the global and local community. We are not free agents who make decisions and involved ourselves in actions without it have an effect on others or such a consequential effect be other than the core of morality and the ethical life.

This is certainly a summary of things that, if present with more depth, would be a substantial tome of many volumes. Nevertheless, there are things here clearly identifiable in the history of the world, the USA, and our current times. One need only to follow the newsbites and talking points is any given day. A simple test is just in considering a person's choice of news network. When honest journalism is called "fake news" who is benefiting from that designation? When lies are told and (even when they are know to be, and understood as lies) who benefits from the lies. When a large segment of society does not even care that lies are being shared every day by people in administrative and governmental leadership, such lying becoming the new normal, who benefits from the lack of concern?

We live in a time that is unlike any time that our current generations have experienced before. While it is not new territory, it is novel territory for us. And, what has history taught us? There is a great need to holding each other to accountability and the need for standing up for what is true, what is right, and what is good.

Coming from a Christian context as an academical and vocational person it boggles my mind how fundamentalism has shaped our lives in the last 4 decades. It seems to have gotten a jump start in the Reagan era and the overtaking of the Southern Baptist Church by the most radical, right wing movement. Since then, except in a few times of regathering and rebuilding of the evangelical think tank it has been looming large in economic, political, and academic life.

It has drawn lines deeply in the sand that are fought over with an intensity that reeks havoc and draws forth horrendous acts in the name of "making America great again." When will this horrendous irrationality end? It cannot come soon enough! 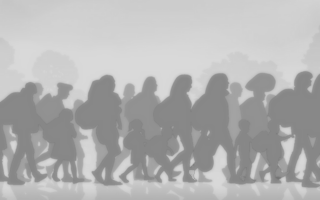